Active Management is Far From Dead

Eric Balchunas has an article on Bloomberg titled The Financial Industry Is Having Its Napster Moment asking "Has the music stopped for the financial industry?", sharing the following chart of flows since 2007. 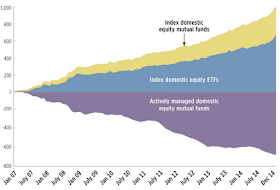 He forecasts ~$1 trillion in outflows from higher fee active management every 4 to 5 years from here, which he believes will cause a material decline in revenue for investment management firms.


In other words, about $2.5 trillion in assets could migrate out of active mutual funds over the next decade. That money will shift from producing $18 billion in revenue to producing just $5 billion. That’s $13 billion less in revenue in the next decade and upward of $30 billion over the next 20 years. All this could be expedited by the new fiduciary standard—as well as a parallel trend that sees institutional funds moving toward passively managed investments, too.

As I'll outline below, while this is true in a vacuum... it misses an important aspect of what really drives asset growth (hint... for established players, it's not flows).


Flows Do Not Equal Asset Growth = The Industry is Still Thriving

Given this level of flows to passive from active, you would likely guess that the level of AUM for passive solutions would have grown by a much greater amount than active mutual funds, especially following the failure of active managers to protect investors during the financial crisis... right?

Given the huge AUM "advantage" of the much more mature mutual fund business, market appreciation has allowed domestic equity active managers to grow AUM by exactly the same amount within the domestic equity category, almost $1.8 trillion each since March 2009 market lows (data from Morningstar). 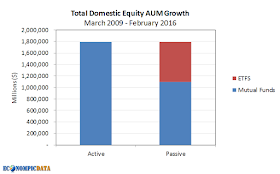 And while the Bloomberg article focused on domestic equities, let's take a look at the whole mutual fund / ETF complex.. 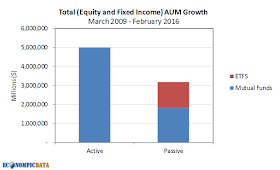 That's a HUGE jump in AUM (and revenues) for investment management firms and given the huge operating leverage these managers employ (i.e. scale is huge for the bottom line) they are printing money.

So... unlike the music industry that has seen revenues slump as the preference for a high fee record slice has shifted to low fee digital, all while the overall music pie remains small (or has gotten smaller), the preference for a passive slice of the investment pie has occurred while that pizza has grown from a small to a large one. 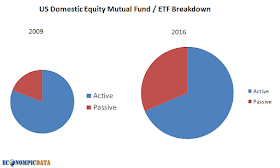 If you believe capitalism isn't dead (I don't), then overall AUM in domestic equities (and especially across all global assets) will continue to expand... likely faster pace than active will be replaced.