As Mike Konczal noted this morning, a key indicator of labor recession is still in force: if you’re unemployed, you’re still more likely to drop out of the labor force entirely than you are to find a job.

Let's see how that trend has fared over the longer term. 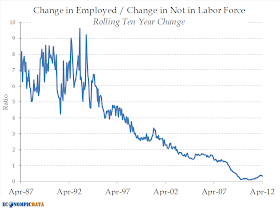