Employment Market Continues to Muddle Along

The nation’s employers added 115,000 positions on net, after adding 154,000 in March. April’s job growth was less than what economists had been predicting. The unemployment rate ticked down to 8.1 percent in April, from 8.2 percent, but that was because workers dropped out of the labor force.

The share of working-age Americans who are in the labor force, either by working or actively looking for a job, is now at its lowest level since 1981 — when far fewer women were doing paid work.

The first chart shows the unemployment rate from the payroll survey, which shows the headline improvement. 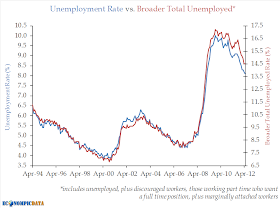 The next chart shows the issue with the calculation. The reason for the improvement in the unemployment rate is due to the continued departure of millions from the labor force (if you're not looking for a job, you're not technically unemployed). 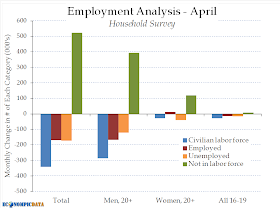 The final chart attempts to account for the declining labor force through a cyclical adjustment. Similar to Shiller's cyclically adjusted P/E ratio, the below normalizes the labor force participation rate through a 10 year rolling average, then assumes the difference in that average and the latest number of participants are unemployed (or in the case of a rising workforce, it reduces the number of unemployed).

What we see is that the labor force was potentially much stronger than headline figures indicate throughout the 1960's - 1990's as the participation rate increased (in no small part due to women entering the labor force), as it took some time for the labor market to accommodate the increase. Since 2000, the reverse has been true as the participation rate has trended down... now at the lowest rate since 1981. Taking the current number of workers and assuming a cyclically adjusted labor force, unemployment is still above 10%. 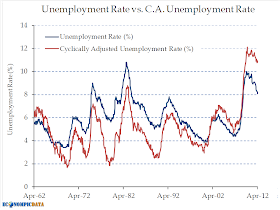