Based on my Twitter feed, stock buybacks seem broadly misunderstood in terms of what they are meant to accomplish (to redistribute excess capital back to shareholders) and the impact they have relative to dividends. As an aside, I also don't understand the following typical complaints:


As a result, I wasn't too surprised when the below chart made the rounds yesterday, along with the following implications:

In this post I'll provide the case for why (ignoring taxes and the effects of signaling):

Buybacks and Dividends are Economically Identical

Excluding the potential signaling or tax effects of buybacks vs dividends, buybacks and dividends are identical in terms of overall economic impact. For example, assuming the following:

Situation 1: Corporation X distributes the excess cash to their shareholders via a $2.5 billion buyback

Situation 2: Corporation X distributes the excess cash to their shareholders via a $2.5 billion dividend

A table summarizing the above example (click for larger image) 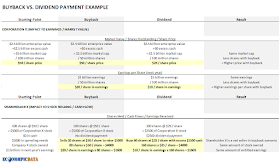 What has stayed the same?
* In the buyback scenario, $2.5 billion is bought back by Company X, but if all shareholders acted like Shareholder X, they would sell $1 billion for their spending needs ($1.5 billion net purchases); in the case of dividends, of the $2.5 billion distributed, $1 billion is spent, and the same $1.5 billion is used to buy back shares with the excess cash.

As highlighted above under 'what has changed', household outflows are in fact impacted on the margin by the form of capital distribution (i.e. whether it is received via buyback or dividend). In the case of a buyback, households are simply creating their own dividend through the sale of shares. Given the two situations are identical in terms of overall demand for Company X stock (demand at time 0 was $5000 worth of stock, post spending it was $4000), we can see why flows really don't matter.

In fact, while the initial chart circulating through Twitter highlights the negative flows from the household sector for stocks from 2008-2015, what may be a surprise is that the overall level of stocks held by the household sector (i.e. a better measure of demand) jumped from $5.4 trillion at the end of 2008 to more than $12.7 trillion over that same time frame (as of 9/30/15  - the latest z.1 report), a normalized increase of 37% of GDP to 70% of GDP.

But a key point is that household net flows for a mature / functioning economy should be negative... when markets have positive returns, investors put in less money today than what that investment should compound to when they make withdrawals in the future. Thus, it should be no surprise that net flows from the household sector have historically been negative over all longer periods of time going back 60 years, while the amount of stock held by the household sector has continued to move higher. 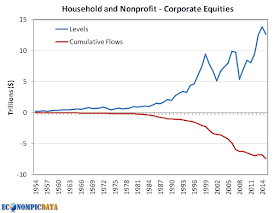 To summarize... the form of distribution really does not matter and buybacks are not evil... the next time you hear someone state buybacks are the cause of the run up in stocks, try replacing the word buyback with dividend.